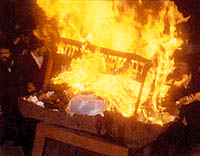 When you look forward to something very much, when you fix your gaze on a special moment in the future, you count the days to that event. When the Jewish People left Egypt, even though their new-found freedom was very sweet to them, their gaze was fixed on a moment that Moshe told them would arrive seven weeks later - the giving of the Torah on Mount Sinai.

From the second night of Pesach, every night for seven weeks, we count the days that have passed on this spiritual journey from Egypt to Sinai. We call this process 'The counting of the Omer.'

The emergence from Egyptian slavery marked the beginning of the physical freedom of the Jewish People. On the spiritual plane, however, we were still sunk in the morass of Egyptian immorality and spiritual pollution. 210 years of Egyptian slavery had brought us very low - down to the 49th level of spiritual corruption. We were standing at the door to the 50th level. Before the giving of the Torah, noone who passed through that door, returned. In seven short weeks, Hashem brought us from the brink of spiritual abyss to the highest level of all the generations - the Generation of Knowledge, the generation who were fit to receive the Torah.

Sometimes, when we think of spiritual greatness, it seems so far away from us - another galaxy. We think to ourselves that we could never be really spiritual. It's all too difficult. We're too enmeshed in the physical world and its baubles and its lures. All it took was seven short weeks for the Jewish People to rise from the pits of pollution to the heights of closeness to the Creator. But the key to their success was that their gaze was Heavenward. As Oscar Wilde put it "We are all in the gutter, but some of us are looking at the stars."

When we fix our eyes on the stars of spiritual greatness, when we turn our heads Heavenwards, Hashem draws us close to Him and the distance between Heaven and earth is a mere seven weeks.

This article originally appeared in SEASONS OF THE MOON for Iyar 5756.
.

« Back to Sefiras HaOmer