Exploring the connection between the number 4 and Pesach

For significant numbers of non-traditional Jews, the Pesach Seder is their last connection to ritual. Jews who build no succah, who don't know when Shavuos is, faithfully assemble year after year to eat matzah and tell about the going out of Egypt.

Mrs. S., an eighty-year-old woman from Ann Arbor, Michigan told me that one year at her Pesach Seder she had forgotten the "shank bone" that traditionally goes on the symbolic Seder Plate, and her grandson went over to her refrigerator, took out a pork chop, and placed it on the Seder Plate.

Even at this home, however contradictory, some confused semblance of Pesach ritual stubbornly persists. More than with other traditions, some mysterious spiritual energy emanating from Pesach cuts deeper and longer into the collective Jewish conscience. Why?

Another question: The dominant recurring number in the Haggadah is four: We drink four cups of wine, we ask the "Four Questions," we tell of the "Four Sons." What is the connection between Pesach and the number four? 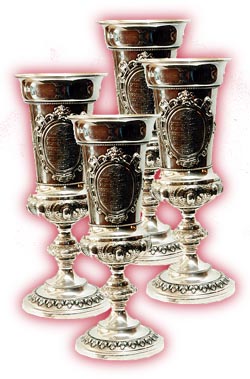 King Solomon says in Proverbs "Listen, my son, to your father's ethic, and do not abandon the law of your mother." Without an investment of focused effort one does not acquire the ethic of one's father. Hence the phrasing, "Listen to the ethic of your father." The "father's ethic" is encountered externally, like a voice. It must be engaged, admitted, and assimilated. Only then to be internalized.

"The law of your mother," on the other hand, is axiomatic. Innate, coming with the territory of being born Jewish, it functions intuitively. Hence the negative phrasing, "Don't abandon the law of your mother." Every Jew is imbued with this given intuition; to abandon it requires an active rejection. When passive, it lingers at least subliminally.

This "law of your mother" can be described as minimal Jewishness. The Hebrew word "Uma" - nation - is from the same root as "Ima" - mother. Jewishness (apart from conversion) is established by having a Jewish mother, the given of one's being. Whereas "listening to the ethic of one's father" is presented to us as choice, with accountability; an act of freewill, at times realized and at times not.

Under the yoke of Egyptian slavery, only an elite core of Jews exercised this option, listening to "the ethic of your father." For the rank and file, the vast number of Jews, there remained only some vestiges of Jewish identity. Minimal Jewishness, the "law of one's mother," the matriarchal mode.

Yet, this very "minimal Jewishness" was the pivot upon which the salvation would swing. That residual lingering consciousness sufficed to connect to the heritage and redemption. Without this minimum Jewishness, the floodgates of total assimilation would have burst open.

Providential guidance determined that history take another course. In Egypt, minimal Jewish identity remained; and the precariousness of that identity heightened the urgency for immediate exodus.

Why is the number four a dominant recurring theme in the Haggadah? The number four symbolizes the Matriarchs. Sara, Rivka, Rachel and Leah. This, "the matriarchal four," this "law of our Mothers" is what sustains us in exile.

Egypt would be a paradigm for all future exiles. Having built up sufficient antibodies to resist the malady of Egyptian exile, the Jewish nation could then survive all future exiles. The covenant guaranteeing Jewish continuity was made with the patriarchs. Yet, the mechanism by which the pact functions is the matriarchal mode. Wandering through the bleak valleys of dispersion, minimal Jewishness would be the bridge connecting to the next peak of mitzvah performance, to the next moment of "listening to the ethic of your Father."

Returning to our original question: Why does Pesach linger so much longer in the collective unconscious of even so-called secular Jews? Just as a given space has its special combination of topography, minerals and climate, so time has its own unique landscape. When the calendar rolls around to that place in time called Pesach, the mystical minerals of that spiritual lode can be mined. Returning to the "time-station" called Pesach, G-d reaches out to Israel just as He did that first Pesach. Every Jew feels, senses, a reactualization, a reawakening of the matriarchal root core, of his personal, and our national, identity.

When describing the father's dialogue with the son "who does not know how to ask a question," the Haggadah directs us: "You begin for him." The word "you" here is written in the feminine "aht." Here too, we see the matriarchal mode as the mechanism for maintaining minimal connection, even for the son who does not know enough to ask. That will bridge to the moment when the father can fulfill the mitzvah of "you shall tell it to your son." Ultimately, there will be that reunion of "listen my son to the ethic of your father, and do not abandon the Torah of your mother." The mitzvah of the Haggadah is just such a moment of reunion.