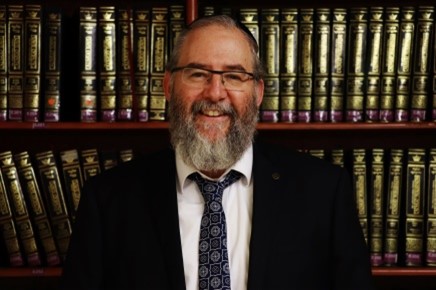 A few weeks ago, our distinguished colleague, Rabbi Dr. Guy Matalon, Director of the Mechina Program, received an invitation to lecture at the NATO Defense College (NDC) in Rome, Italy.

The North Atlantic Treaty Organization (NATO) was established in 1947, soon after WWII, as a defense pact consisting of 10 European nations, the United States and Canada. Its initial purpose was to present a unified defense against future attacks by Germany and the Soviet Union. Over the years, NATO has expanded its membership to 30 nations, including Germany and a number of former member states of the Soviet Bloc.

The NDC was established in 1951 by then General and future President of the United States, Dwight D. Eisenhower. In its mission statement, General Eisenhower set forth a number of goals, one of which was to “prepare selected officers and officials for important NATO and NATO related multinational appointments.” In preparing those officers and officials, it was deemed necessary to teach them about the major religions and their impact on world history and on contemporary political and military realities.

The invitation to Rabbi Dr. Matalon to present a dissertation on Judaism to the College came as a seemingly fortuitous combination of unrelated circumstances. For the past number of years, the Israeli diplomat, Dr. Hillel Newman, a religious Jew, had given the yearly lecture to the group.

Recently, the Israeli Foreign Office named Dr. Newman as its Counsel General in Los Angeles. He was not able to travel to Rome for the lecture this year, and he called a close friend from his yeshiva days to fill in for him. That friend, a very prominent Rav involved in kashrut in Israel, lives next door to Rabbi Matalon. The lecture was to be in English, and since the Rav’s English was not very fluent, he suggested to Dr. Newman that his good friend and neighbor Guy Matalon would be eminently qualified for the job. Rabbi Matalon has a Ph.D. from NYU inMedieval Jewish and Islamic Thought, and is the Director of the Mechina Program at Ohr Somayach in Jerusalem.

Dr. Newman contacted the College and they agreed to invite Rabbi Matalon to give the lecture and appear on a panel with representatives of the Roman Catholic Church and Islam. The lecture took place during the last week of October.

A funny thing happened on the Arkia flight to Rome. Rabbi Matalon’s chevrusah (Torah study partner) is a pilot for Arkia, and Rabbi Matalon wondered whether he might be the pilot for his Rome flight! He was not, but his chevrusah contacted the pilot and co-pilot for that flight to tell them about their special passenger. Rabbi Matalon was invited into the cockpit, and, to his surprise, he discovered that the co-pilot, Akiva Brown, had been a student at Ohr Somayach 23 years earlier. A small world.

The lecture was very well received by the participants. The imam, an Italian representing Islam, was particularly impressed. He expressed the hope that the two of them could work together promoting warmer relations and better understanding of Judaism and Jews among the Muslims of Europe and the Middle East.