Security Gate in Front of Door

Q: I’ve got a metal security gate right outside my wooden front door. Each of the doors has its own doorposts and lintel. Do I need two mezuzahs?

A:If the space between the two doorframes is more than four tefachim, you would need two mezuzahs:The area between the two doors has the special status of a beit sha’ar (gate-house) and thus needs a mezuzah even though it is not four-by-four amot square.

If the space is less than four tefachim, a mezuzah should be put on the inner doorframe.The security door needs no mezuzah since the area it encloses is too small to be considered a beit sha'ar.

Q: What if the doors are fitted within one wide doorway and thus share the same doorposts and lintel?

A: In that case, even if the space between them is more than four tefachim, only one mezuzah is necessary. The inner door should get the mezuzah. Since it opens onto a large room, it has a clear Torah obligation, whereas the obligation of a small beit sha’ar may be rabbinic when it has no purpose other than as a passageway.

However, if the space between the doors has a distinct purpose, such as a storage area, a second mezuzah should be affixed on the outside door, without a beracha.

Even if the inner door only has space for a mezuzah on the outside of its post, since the mezuzah is within the doorway and under the lintel, it may face forward. 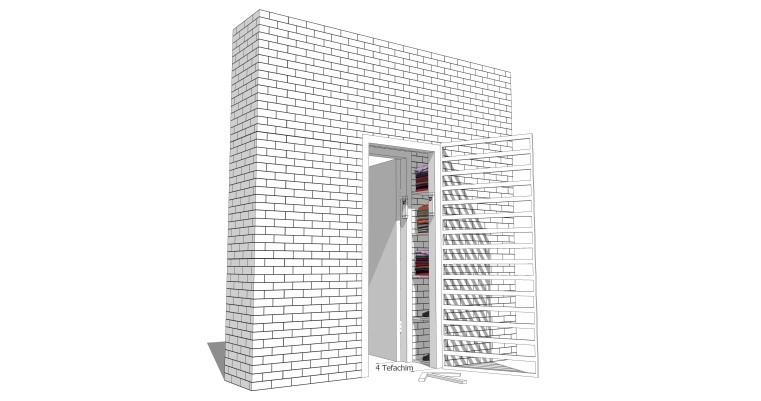 Got a mezuzah question or story? Email [email protected] or submit on my website mymezuzahstory.com. Free “Mezuzah Maven” book for every question or story submitted (when published in the near future!)

« Back to Mezuzah Maven