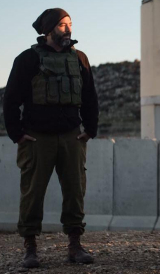 How many of us have had a near-death experience? Hopefully, not many. Binyamin Tzvi did, and he survived, thanks to the great kindness of Hashem Yisborach.

He was doing his miluim, a yearly military obligation lasting anywhere from a few days to a month. Because he is a paratrooper, when on active duty, his miluim is not spent peeling potatoes or sitting in an office going over paperwork. It’s spent in the field on patrol.

A few weeks ago, on Rosh Chodesh Adar, Binyamin Tzvi was on patrol in an Arab village in the center of the country. Because Palestinian elections for local councils are due to be held in March 2022, campaigning is in full swing. Hamas is a major contender in the elections. Fatah (PLO) is held in great contempt by the majority of Palestinians in the West Bank because of its anti-democratic rule, its pervasive corruption and because of its cooperation with the Israeli government. Hamas, on the other hand, while even more antidemocratic than the PLO, is not regarded by “West Bankers” as corrupt as Fatah, although their compatriots in the Gaza Strip might argue with their assessment, and few would argue that they are in league with Israel. Instead of holding large rallies with long-winded speeches and campaign slogans, campaigning for Hamas consists largely of rock throwing at Israeli military and civilian vehicles, hoping to kill Israeli soldiers and civilians, which greatly endears them to much of the Arab population. Their hope is also to provoke the Israeli Army to react, thereby making “martyrs” of hothead rock throwers. With each death of a “martyr”, Hamas strengthens its chances of winning, by being seen as the party with the will to stand up to the Israelis.

At three am on that moonless night, Binyamin Tzvi and his partner were patrolling a narrow roadway in the village, close to the main road leading to Karnei Shomron, a nearby Jewish town, on the lookout for rock throwers. All of sudden, they saw a car that stopped about 30 meters in front of them. Out jumped three terrorists, who ran towards them, showering them with heavy stones. Binyamin Tzvi, who was carrying a tear gas gun, which when fired shoots a gas grenade and a flare, shot three times at the terrorists. They disappeared down another alley.

Five minutes later, as they were making their report on the incident, another car appeared in the distance. Binyamin Tzvi waved his arms wildly and yelled to it in Arabic for the driver to stop. He didn’t, but kept driving towards them. Binyamin Tzvi shot a flaring grenade in front of the car to signal for it to stop. But, instead of stopping, the car sped up. It was now bearing down on the two of them.

The road was so narrow that there was no room on the sides for the soldiers to squeeze into and avoid being hit. In fact, the car was aiming right at them.

Now, Binyamin Tzvi fired a grenade at the car. The tear gas grenade bounced off the windshield and back at Binyamin Tzvi and his partner. They were now enveloped in a cloud of tear gas and without gas masks. Through the smoke, the headlights of the car came closer and closer. Binyamin Tzvi thought that he was going to die, and yelled out to his partner, who had an assault rifle, to shoot to kill. The partner did so, letting loose two bullets that flew wide of their mark — and then the gun jammed.

Miraculously, as they were backtracking down the alley, they saw a small curve in the road. They both squeezed into it, the speeding car missing them by a millimeter.

Further down the road was a large Israeli Army jeep with ten soldiers standing nearby. Seeing that he could not avoid the jeep and the soldiers, who were now all pointing their rifles at him, the driver stopped his car and put his hands up. The officer in charge ordered him out of the car and arrested him.

In the meantime, Binyamin Tzvi dashed to his car, grabbed his rifle and ran to where the alleged terrorist was being hustled into a vehicle for transport to an Army base, where the Shabak, the Israeli domestic intelligence service, would question him.

“I wanted to kill him,” Binyamin Tzvi told me when relating the story. “He tried to kill me. But, when confronting him again, I realized that it wasn’t the right thing to do. The Arab said that because it was dark and the road unlit; he didn’t know that we were Israeli soldiers. He said that he had just come from his father’s house in the village and was driving back to the village where he lived. He was totally surprised by the yelling, and then disoriented by the flare, and had no intention to harm us. Just to get away. Murders between Arabs in the Arab towns are quite frequent.

“Had I shot him then”, said Benyamin Tzvi, “there would have been an inquiry and possibly a trial, and who knows what would have happened to me? And, then, if I had killed an innocent man, I don’t know how I could have lived with myself for the rest of my life.

“I was very fortunate. I was given leave for a few hours and drove to Karnei Shomron and went to the shul. I davened with the early minyan and benched gomel. I thanked Hashem for saving my life and then went back to our base and resumed my duties.

“The first person I called to tell the story was your daughter, my sister Yocheved, who had survived a terrorist attack at the Shimon HaTzaddik station on the Light Rail in Jerusalem a few years ago. That attack killed a number of soldiers, when an Arab drove his car into them as they alighted the train and stepped into the roadbed. Yocheved ran and hid behind a wall in Arzei Habira, until she heard the sirens and the police.”

Binyamin Tzvi lives with his wife Miri and their four children in the Pitom Haketores neighborhood of Efrat, where they are active members in the shul of Rabbi Shlomo Katz and mainstays of their community. We are looking forward to sharing a very festive seudat ho’daah with the whole family.