About 250 years ago, way before Starbucks reinvented coffee as the drink of the age, my parents bought me a Pavoni espresso machine for my thirtieth birthday.

I have that machine to this day. I love it. It has more chrome on it than a Chevy Impala. The Pavoni is the Harley-Davidson of coffee machines. It’s built to tolerances of about plus or minus half an inch, which makes it incredibly easy to service and repair — just get the parts somewhere near each other and it’ll work. Even if you’re not a grease monkey you could strip the whole thing down and replace all the gaskets in an hour or two. Many times I have thought about replacing this twenty-nine-year-old tank with one of the modern microprocessor-controlled beauties in the store. Mine’s rusting underneath and it leaks a bit. The rubber base is starting to perish, and I’ve lost some of the washers, but it still makes a darn good cup of coffee. (This article is being powered by two of those cups right now.)

Last time I de-scaled it I thought it would have to go because the coffee started to taste bad; then I realized I used the wrong kind of vinegar to clean it out. During the couple of days that its “head was on the block” I went through something that I can only describe as withdrawal symptoms (and not from the coffee — I used instant in the meantime.)

Here was this old warhorse whose guts I knew, which I had managed to repair more than once, about to be replaced by a machine that would be impossible for me to do more than… make coffee. If — and more probably — when it broke, I would have to take it to a repair center where doubtless they would tell me it would be cheaper to buy a new one.

Repair is a dying art. 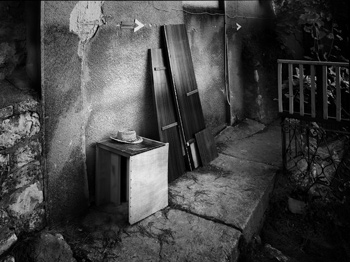 Many years ago the economic balance between labor and material tipped toward material. Once upon a time, labor was cheap and materials were expensive. Nowadays, even in places like China, labor is comparatively expensive and there are a plethora of new materials — mainly plastics — that are ludicrously cheap. Which basically means: Exit the repairman.

Apart from any nostalgia of which I may be guilty (nostalgia tends to increase in proportion to the number of years over which you have to nostalge), repairing something gives us a sense of achievement that merely producing our credit card fails to do by miles. But I think there’s a deeper reason here as well.

The world was made to be fixed.

In the Aleinu prayer that a Jew says three times a day, we pray to G-d, “to fix the world under the Kingdom of Sha-dai.”We refer to G-d in many ways. For example: Ado-nai — the Tetragramaton — G-d’s four-letter name, which is never pronounced as it is written, Elokim — the name that signifies precise judgment, and El — the name of mercy. In His essence of course, G-d has no ‘Name’. G-d’s names are the way He manifests Himself in His world, how we perceive His interface with the creation. What, then, is the connection between the idea of ‘fixing the world’ and the name Sha-dai?

When G-d created the world, He did not create it as a complete and finished entity. Instead He fashioned a single point (actually a rock that sits of the Temple Mount in Jerusalem) and the rest of the Universe expanded from there. At a certain point He said “Dai!”, which means “Enough!” In other words, the potential for more exists in this world, but G-d intended that the world should be left lacking, incomplete, and that Mankind would have the opportunity and the obligation to bring it to its completion. The world can be — and needs to be — fixed. Thus, in Aleinu we use the name “Sha-dai” when talking about the fixing of the world.

The art of espresso machine maintenance also manifests itself DIY. Why is DIY — Do-it-yourself — so popular? Though prices in a DIY shop are much lower than their pre-built counterparts, factor in your own time and you may well find that it’s more expensive to build something yourself. Of course, it all depends on how much your time is worth. If you’re a corporate lawyer who can charge $500 an hour, building your own greenhouse may be a seriously expensive prospect.

So why would a corporate lawyer prefer to build his own greenhouse?

There resonates within us the hidden knowledge that Mankind was created to bring the world to its perfection; the satisfaction of my hands-on involvement reflects the purpose of the world. Woven into the creation is its yearning to be brought to completion.

G-d’s original plan for the world was that there should be one being who would fix the lacking of this world and bring it to perfection; that being was called Adam, Man. Man was born on Friday and the entire history of the world should have been played out in the hours of Friday and finished with the commencement of Shabbat. Had Adam not transgressed the one prohibition that G-d had commanded him, G-d’s purpose in creation would have been fulfilled. Adam would have fixed the world.

As we know, things didn’t quite turn out like that.

By ingesting the forbidden fruit Adam internalized and actualized the latency of evil inherent in the creation when G-d said “Dai”! — “Enough!” By bringing evil into his body Adam made it impossible for the body to ascend to its elevated eternal state without having to suffer death, decay and resurrection. Nevertheless, man was created to fix the world. It’s in our genes; it’s part of our programming.

One of the ways this latent motivation emerges is in the ecology movement. Judaism has always recognized that Mankind has the ability to build the world or to destroy it. In fact, ecology has always been a fundamental part of Jewish thought. However, there exists a deeper side to ecology than is generally understood.

When G-d created the world one of the first things He created was light. “Let there be light!” That light was not the light with which we are familiar, for the sun and the moon did not shine until the third day. It was to another, greater light that the Torah was referring in its opening verses. That light is called the Ohr Hagazuz, “The hidden light.” With the Ohr Haganuz you could “see from one end of the world to the other”, meaning you could see cause and effect; you could see why things happened the way they did, and why they had to happen that way.

The Talmud (Chagiga 12a) explains that the light itself was happy when G-d hid it away so that evil would not benefit from it: “The light of the righteous will be happy”. When holy people use that light, the light itself becomes elevated, and if used by evil, it is damaged and degraded.

When Yaakov was fleeing his brother Eisav, the Torah describes how Yaakov laid his head to rest on some stones. The stones then had what can only be described as an argument over which stone the tzaddik would lay his head on (Talmud Bavli 91b). The stones argued because they understood the tremendous elevation that the physical world experiences when it is used by a holy person in the service of G-d.

Judaism’s concept of ecology is when we do a mitzvah, be it the simplest action, by kindness, by prayer, we elevate not just ourselves but the world’s eco-system as well.

My desire to fix that espresso machine goes deeper than DIY, deeper than saving a buck or three. It is none other than my aspiration to fix the world – masquerading as a cup of coffee.

A Window to the World

all poems
are about the same thing,
all dreams
are the same dream,
all photographs
are identical;
all open the window
to the part of the heart
that knows its own reflection.
Print