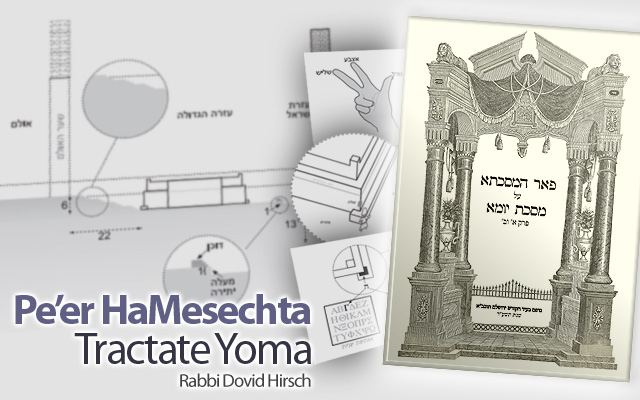 Sometimes one who is learning has difficulty "picturing" the reality. Where was the mizbayach in relation to the rest of the Beit Hamikdash (according to the various opinions)? How did the Kohen Gadol sprinkle the blood "one up and seven down" (according to Rashi and Tosfot)? How was it possible for the Kohen Gadol to stand on Har HaZeitim and see through the gates and over the walls into the Ulam before he burnt the ashes of the red heifer (according to the different amoraim in the gemara)? How could the Kohen make a kuntz and win the lottery?

In Peer HaMesechta Rabbis Dovid Hirsch and Shabsi Gukovitzki help someone learning the first two chapters of the gemara in Masechta Yoma with Rashi and Tosfos "inside" understand clearly with many Illustrations, time-lines, tables, and charts organizing the complicated material.

We are delighted to be able to have this sefer available for free download from Ohr.edu.

Rabbi Dovid Hirsch was a cartoonist for his school newspaper and heading for a law degree before coming to Ohr Somayach in 1981. Since then, Rabbi Hirsch has combined his expertise in halacha with his artistic talents to produce the highly accessible illustrated Mishnah Berurah entitled “Pe’er Halacha.”

What began as sketchup drawings for his kollel colleagues turned into a booklet about etrogim that sold out its first printing of 1,500 copies. Under the support of his Rosh Kollel of 15 years, Rabbi Mordechai Freidlander, Rabbi Hirsch’s illustrations have expanded to cover the very technical areas of halachah such as the arba minim, tzitzit, safrut (how to write a Sefer Torah, mezuzah and the like), tefillin, and Chanukah. “A lot of safrut teachers come and buy 10 copies of ‘Mishnat Sofrim’ at a time,” says Rabbi Hirsch of his book. In the age of technology’s instant visual gratification, Rabbi Hirsch’s illustrations give an opening to those who find the technicalities of the text too difficult to follow. His next project is on the laws of the Succah.