What is Tu B'Shevat and what are some of its customs? It was 1913, the early days of modern Jewish settlement in the nascent Jewish colonization of Palestine. The Israel Teacher's Association, along with 1500 Jewish students, traveled to the Jewish colony of Motza, three miles west of Jerusalem. The students planted trees and exchanged fruits with each other. This Jewish Arbor Day was further cultivated by the Jewish National Fund in an effort to combat the deadly disease of malaria in the swamplands of the Hula Valley. The JNF planted eucalyptus trees in order to drain the malaria-infested areas, saving Jewish pioneers' lives.

One Tu B'Shevat, when I was an American student in Hebrew school, I bought a tree to be planted in Israel. Twelve years later, when I visited Israel for the first time, I expected to find a twenty-foot pine. Not only was I disappointed about the prospects of locating my tree, I found I had been misinformed about what Tu B'Shevat really signifies. 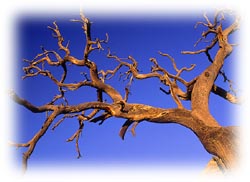 Let's take a look at the typical weather patterns in the Land of Israel. There are two main seasons, the winter rainy season, which starts shortly after Rosh Hashana, and the arid summer season. It typically does not rain at all during the summer. Therefore, the inhabitants of Israel are dependent upon the winter's rainfall. Tu B'Shevat, the 15th of Shevat, is the day by which most of the winter's rain has fallen. Yoram, an Israeli botanist, explained to me that the tree generally responds to the cold winter weather by hibernating. The winter rains do not benefit the future fruit as much as they benefit the dormant tree whose leaves have fallen. However, when Tu B'Shevat comes and spring approaches, the weather intermittently warms and the tree begins to circulate its nutrients to the leaves which begin to photosynthesize. Israeli almond trees are the first to blossom shortly after Tu B'Shevat, followed by peaches and apricots.

Chanata is the beginning phase of the fruit's development, which occurs shortly after the tree's blossoming. The Tannaim explained that if the chanata would occur after Tu B'Shevat, most of the fruit's sustenance would be received from this year's winter rains, whereas the fruits that were to blossom prior to Tu B'Shevat (a very rare occurrence) would have been nourished from the previous year's rains.

Jews throughout the world blow the shofar and dip apples into honey on the 1st of Tishrei, commemorating the world's creation, which is actually one of four Jewish New Years.

The Mishna states that the 1st of Nissan is the New Year for counting the reign of Jewish Kings and with reference to the Festive cycle.

The 1st of Elul is the cut-off date for tithing one's livestock.

The 1st of Tishrei is the New Year for judging Mankind; for the count of sabbatical and jubilee years; for counting the first three years (orlah) produce of newly planted trees; and for grain and vegetable tithes.

The 15th of Shevat, Tu B'Shevat, the New Year for the trees, is the cut-off point for tithing fruits.

Praying for a Beautiful Etrog

The Mishna refers to Tu B'Shevat as the New Year for the Tree, in singular form, as opposed to "trees" in the plural. Why? The Bnei Yisaschar explains that the "tree" refers particularly to the beautiful tree used for the performance of a mitzvah, the etrog (citron), which is one of the four species taken on Sukkot. Many pray on this day for a beautiful, unblemished etrog, symbolic of the tzaddik, the untainted Jew, in order to aesthetically perform the mitzvah as best as possible.

It is customary to partake of fruit on this day, especially from the produce for which the Land of Israel is praised. These species are: Wheat, barley, grapes, figs, pomegranates, olives and dates. By Man's increasing the saying of blessings upon G-d's produce, we become cognizant of G-d's providential role in creation. Not by our toil alone does the land bear fruit. If not for G-d providing rain and sustenance, the farmer's efforts would be wasted.

The Torah tells us that if the Jewish People were to go to war and besiege the enemy, it would be forbidden to needlessly destroy fruit-bearing trees. The verse "Is the tree of the field a man that it should come under siege before you?" (Deuteronomy 20:19) tells us that Man's life is dependent upon the tree's sustenance.

This ecologically-sound concept is further developed by Rabbi Chanoch Karelenstein, who expounds upon the link between Man and his supply of sustenance from the tree, as the tree is symbolic of Mankind's vitality. On Tu B'Shevat, just the beginning of springtime, the tree's potential, the fruit, is yet to be seen. Still, we rejoice, faithful that in a few weeks' time the tree will bear fruit. There are times when one may be sliding downwards, either physically or spiritually. There is an "autumn" and an even colder "winter," but Man should not despair! Just after the coldest part of the winter, when the fruits are still concealed, comes the metaphysical spring of Man. Surely Man's potential shall bear fruit like a nurtured garden!

« Back to Tu B'Shvat